Linking Europe and the Middle East, suspended between the new and the long-established, Turkey retains a disconcerted balance of both east and west. Modern city boutiques and exotic bazaars clamour for customers, the weekly tolling of church bells interrupts the daily call of the muezzin, and Roman ruins and the beginnings of Christianity compete for attention with the history of the Ottoman Empire and modern secularity.
Turkey has a lot to offer; breathtaking natural beauties, unique historical and archaeological sites, steadily improving hotel and touristic infrastructure and a tradition of hospitality and competitive prices. Therefore, it is not surprising that this country has recently become one of the world’s most popular tourism destinations.

Due to Turkey’s diverse geography, one can experience four different climates in any one day. The rectangular shaped country is surrounded on three sides by three different seas. Its shores are laced with beaches, bays, coves, ports, islands and peninsulas. The summers are long, lasting as long as eight months in some areas. Turkey is also blessed with majestic mountains and valleys, lakes, rivers, waterfalls and grottoes perfect for winter and summer tourism and sports of all kinds.

Facts you need to know about

o Turkey is a bi-continental country that is located mainly in the Middle East (Southwest Asia) known as Anatolia and partly in Southeast Europe known as Thrace.
o The only city in the world located on two continents is Istanbul, which has been the capital of three great empires, Roman, Byzantine and Ottoman for more than 10,000 years.
o Turkey has two European and six Asian countries as neighbors.
o Mt. Agri is the highest peak (5,166 m) in Turkey also known as Mt. Ararat, is said to be the place where Noah’s Ark came to rest.
o The Water body – Bhosporus Straits divides the European part of Istanbul from the Asian Part.
o Mausoleum of Halicarnassus and the Temple of Artemis are two of the Seven wonders of Ancient world in Turkey.
o Contrary to popular opinion, Tulip originated not in Holland but on the Asian steppes. The Turks first gave the Dutch their famous Tulips that started the craze for the flower in England and the Netherlands.
o Anatolia is the location of the first known beauty contest, judged by Paris, with Aphrodite, Hera and Athena as leading participants
o Julius Caesar proclaimed his celebrated words “Veni. Vedi, Vici” (I came, I saw, I conquered) in Turkey when he defeated Pontus, a formidable Kingdom in the Black Sea Region of Turkey.
o St Paul (Saul) was born in Tarsus, situated to the east of Mersin.
o Istanbul, initially Constantinople, was the capital of the Byzantine Empire and the Ottoman Empire.
o St. Peter’s Church, situated in Antioch (Antakya) – Turkey, is the first church built by man.
o It was the Turks who introduced coffee to Europe.
o Cherry was first introduced to Europe from Giresun (Northern Turkey).
o All the ‘Seven Churches’ of Apocalypse are situated in the Aegean region of Anatolia, namely Ephesus, Smyrna (Izmir), Pergamum, Thyatira (Nazilli), Sardis, Philadelphia (Alasehir) and Laodicea.
o The oldest known human settlement is in Catalhoyuk, Turkey (dating back to 7th millennium BC).
o It was in ancient Anatolia that writing was first used by people.
o The oldest tin mine in the world has been found in Goltepe, 60 miles to the south of Tarsus.
o Turkey is the only secular Muslim country amongst all the Muslim countries in the world.
o Turkey is one of the few countries in the world that is agriculturally self-sufficient.
o There are approximately 9,000 species of flowers in Turkey, out of which 3,000 are native.
• Time Difference:GMT+3
• Weather and ClimateTurkey has seven distinct geographic weather and climatic regions. Spring (April to May) and autumn (September to October) are the best times to visit Istanbul, since the climate is perfect for sightseeing in Istanbul and on the Aegean and Mediterranean coasts.
• National carrier (Airlines)Turkish Airlines is the National Carrier of Turkey.
• CurrencyTL
Languages SpokenThe official language is Turkish. English and German are widely spoken in major cities and tourist resorts 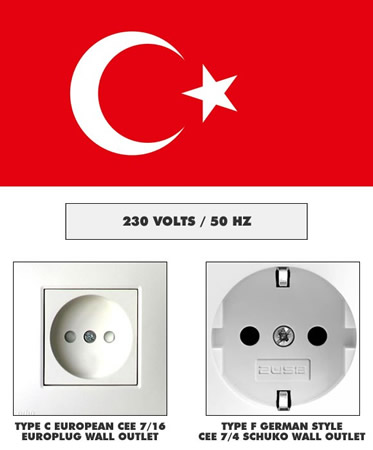 A few words go a long way in making things easier for you in a new country. so here goes!!!
Merhaba – Hello
Tesekkur ederim – Thank you
Gunaydin – Good Morning
Hoscakal – Good bye.
• Communication
o The international country dialling code for Turkey is +90.
o The outgoing code is 00, followed by the relevant country code (e.g. 0044 for the United Kingdom).
o City/area codes are in use, e.g. Istanbul Asya (Asia side) is (0)216 and Istanbul Avrupa (Europe side) is (0)212.
o GSM 900 and 1800 networks cover most of the country.
o Internet cafes are available in the main towns and resorts
o Electricity Plug DetailsThe mains voltage for electricity is 220V and 50Hz. Central European type wall socket (two-pin plugs) is standard in Turkey.

CuisineIt is said that three major kinds of cuisine exist in the world; Turkish, Chinese and French. Fully justifying its reputation, Turkish Cuisine is always a pleasant surprise for the visitor. Turkish Cuisine has a very pure quality. The variety and simplicity of the recipes and the quality of the ingredients are guarantees of delicious meals. 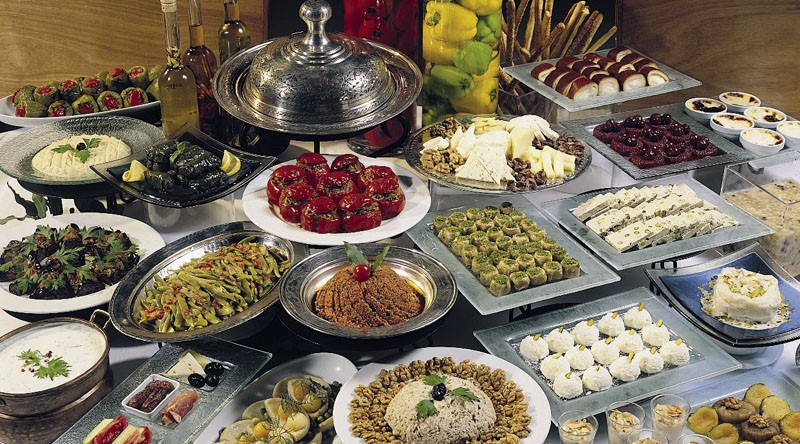 o Religious customs should be respected; particularly during the month of Ramadan when eating, drinking and smoking during daylight hours should be discreet as it is forbidden by the Muslim culture.
o Dress modestly when visiting mosques or religious shrines.
o Do not take photographs of or near military and official institutions and always ask permission when taking photographs of people.
o There is a smoking ban on all forms of public transport and in outdoor venues (including stadiums and playgrounds, cafes, bars and restaurants.but area managed for smokings
o Eat everything on your plate. Some Turkish hosts might be offended if you don’t.
o Put your knife and fork side-by-side on your plate to indicate you are done.
o Don’t use your left hand when dining. The left hand is considered unclean.
o Don’t stand with your hands on your hips or in your pockets.
o Don’t point at someone with your finger.
o Keep your feet flat on the ground when sitting. Showing the bottoms of your feet is considered insulting in Turkey.
o Don’t make the “OK” sign with your hand. It’s a rude gesture in Turkey.
o Shake hands upon meeting someone. Shake hands with everyone present, including the children, and shake hands with the elders first.
o You should only exchange two kisses on the cheek with friends and relatives. 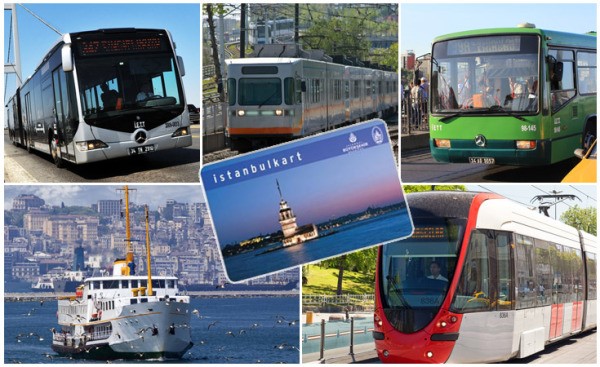 Taxis are very cheap, yellow coloured, run on meters and easy to find, with a roof-mounted Taksi sign. They can also take you door-to-door. The day rate is TRY4.00 per mile. A trip between Sultanahmet and Taksim Square costs 15-20 TL There’s no room for haggling and no need to tip. A 15 minutes ride will be cost minimum fare of 15 TRY
BUS:
Public and private buses run throughout the city. Due to the heavy traffic and unavoidable jams, they can get very hot and uncomfortable. They are often crowded and you will not find a bus that runs after midnight. Tickets are cheap and less than 2,6 TL, they should be purchased before boarding the bus at “Bilet” Kiosk if travelling on a Public Bus.
TRAMS:
Trams run across the city, running on two tramlines – one in the old city and one in the new. Trams are another cheap way of getting around the city, but they do have a limited number of stops. ). Trams run every five minutes from 6am to midnight. The fare is approx TL 2,6.
FERRIES & SEA BUSES:
Boats and ships of all sizes, shuttle between the European and Asian shores, operating to summer (mid June-mid Sept) and winter timetables. Passenger ferries are one of the most pleasant ways to travel around Istanbul. They run up and down the waterways, serving many popular destinations. They run every 20 minutes from 07:00 until 23:00, most voyages cost only TL 2,6

o Due to the current situation in neighbouring Iraq, travellers are advised to be cautious and check with their embassy before departure for a current update on the situation.
o Visitors should avoid any public demonstrations.
o Street crime is relatively low although visitors should guard their valuables at all times.
o Many parts of Turkey lie on a major seismic fault line and are subject to earthquakes and tremors; several fairly recent earthquakes have shaken eastern Turkey, the southwest and southeast

Clothing and Items for Journey

– One black-and-white television,
– One colour TV (up to 55cm screen)
– One pocket colour TV up to 16cm screen,
– One black-and-white television-radio-tape (combination),
– One video recording camera and 5 video tape casettes (blank),
– Camera with eight mm (with ten blank films),
– One slide machine,
– Pocket PC ( Up to 128MB Ram ),
– Compact disc player.
– One portable radio and radio-tape (the properties of the radio-tape will be determined by the undersecretary.)
– One walkman or small tape-recorder,
– Game Boys without cassettes and cartridge,
– Record, cassette or compact disc maximum of 5 for each,
– GSM-Pocket phone (With SIM cards),
Musical Instruments
– Harmonica,
– Mandolin,
– Shepherd’s Pipe,
– Brass band,
– Flute,
– Guitar,
– Accordion,
(One piece of each, at a maximum total of 3 pieces)

– Two partitioned camping tent,
– One diving suit for underwater diving sports (The quality and efficiency of the suit to be determined by the undersecretary.),
– Glider (a pair),
– One boat,
– One surfboard with sailing equipment for water sports,
– Flipper (one pair),
– Other personal belongings one apiece (except for sea motorcycle and sledge),
– Chess set,
– Checker set,
– Five packs of playing cards,

The following are allowed to be imported:

b) In addition to the above allowances, it is also possible to purchase 200 cigarettes, 100 cigars and 500 gm pipe tobacco in the Turkish Duty Free Shops when entering the country.

– The following are allowed in a vehicle while driving, on condition that they will only be used by the owner or driver:

a) A set of screwdriver (maximum 5 with different sizes),
b) Socket Wrench Set (maximum 10 on the condition that it is suitable for vehicle use),
c) Auto pump,
d) Accumulator Charge Apparatus,
e) Auto broom with accumulator,
f) Icebox with accumulator,
g) Inner tube and tyre except for spare tyre,

– Other items to be inspected by the Ministry of Finance and Customs:

– 1 cat or dog or bird or aquarium fish, on the condition that they are with their owners. They must have a medical report from the veterinary surgeon, document of origin and vaccination documentation.

There are regulations about the amount of foreign currency permitted to be brought into the country. In general, there is no limit for a certain amount of foreign or local currency to be imported or exported and anything over the permitted amount should be declared on entry.

In addition to foreign currency, certain personal belongings must be declared on entry, such as jewellery, TV, camera, video recording camera, video player, cellular phones, electronic equipment, camping and sports equipment. Valuable items must be registered to the customs office on entry. It is suggested not to bring excessive amounts of currency or jewellery to prevent any potential problems.